My vision of the future URBAN JUNGLE

The Bosco Verticale was designed by Stefano Boeri and is a beautiful solution for a new standard for future architecture. To give you an idea about the project completed in 2014, here is an extract of an info-PDF from a CTBUH Research Report:

“ The project consists of two residential towers, 27 and 18 floors high respectively, characterised by the presence of dense vegetation along their outer envelopes. There are about 20'000 specimens, including about 700 trees up to six meters high, installed on both towers.”

It has the function of a green lung, comparable to the central park in New York. As Milan is the most polluted city in Europe, the industrial capital of north Italy is concerned to find solutions to improve the quality of life. The main goal was to reproduce the equivalent of 1 hectare of forest in the skyline of Milan; on the completed project it is even almost 2 hectares. They call it a project for metropolitan reforestation and a model of the vertical densification of nature. It is easy to guess what benefit is generated trough this kind of architectural innovation. Reduction of the urban heat island effect, improvements of the air quality, providing biodiversity and natural animal habitats are just a few of the benefits. 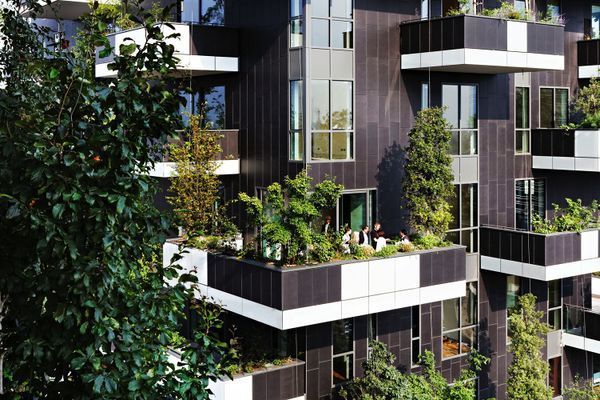 View of a balcony

Until today the architects of the Bosco Verticale work on similar projects in different countries. I think the vertical forest is the future of our cities, it is the perfect solution to reduce the waste of energy and multiply natural spaces. We could generate more green space than the city actually occupies. Combined with the idea of Rotterdam’s transition to urban resilience, considering even food production on the green spaces, like we can observe it in Asia with the vertical gardening, this model could grow into the new standard of urban development. It could help to prevent from urban sprawl and convince people of the benefits of future densification of the city.

I think it is interesting when we have a look on the discussions in my home country, Switzerland. In Zurich for example the main population is against skyscrapers, because they are afraid of a disfigurement of the environment trough concrete and glass architecture as well as the environmental impact of these buildings. With a change of the communal building regulation there could be added the requirement of covering a certain amount of a skyscrapers surface with green space. This is a reasonable solution that would satisfy the demands of the population and dissolve their anxieties of aesthetical and environmental impact of skyscrapers. Compared to Lausanne, where Stefano Boeri won an architectural competition with another vertical forest, Zurich seems just not ready for the future. It is an 114m high residential tower and it will be the first green skyscraper of Switzerland. I hope it is going to change the general attitude of the population and that it will become an example for a sustainable densification of the cities. 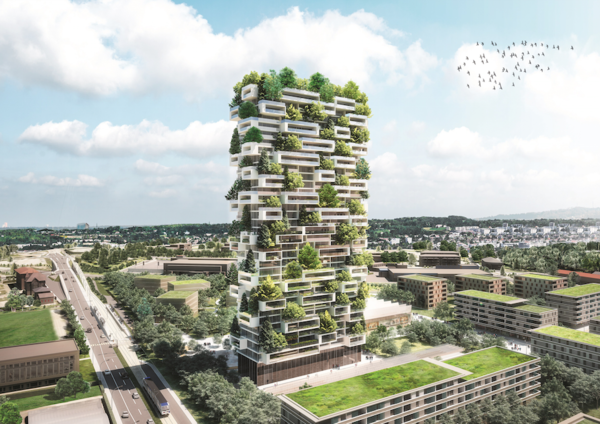 Project in Lausanne by Steffano Boeri

What I think is sad about the Bosco Verticale, is the fact, that the inhabitants of the building do not have anything to do with the forest and that they are the only ones with an actual access to the forest. It is an absolute artificial forest kept by gardeners watching each plant and cutting them twice a year. I understand that they can not count on the flat owners to look after their part of the forest, because not everybody knows how to manage it and the risk of damage is high in this case of an artificial forest. A solution here for could be to spare a certain space of each terrace for the inhabitants to culture their own plants and even vegetables or fruits. But as this micro cosmos is so sensitive and expensive, it may be the best for it to be kept by professionals.

I still like the idea of planting a forest on a buildings envelope. It is kind of romantic but exactly what this time of great stress and depression needs. It could even encourage the middle class and low-income population to revolutionise the great movement of urban and vertical gardening. The Bosco Verticale is in deed a project for the upper class, but I still think it is good. Most flats in skyscrapers are only affordable for the upper 2 or 3 per cent of the population, so to build up a vertical forest is still better than to have a fancy glass building heating up the environment around it and making the life quality suffer.

Here I see the need for low cost design solutions to help everyone to bring the nature back to the cities. We can help our selves with plastic bottle pods, but we can take it further and create reasonable solutions with hydro culture and more possibilities of planting methods. I see the future cities as urban jungles. My idea of future urban development is utopic, I know, but it is one thing that could help to make it up to the planet we are damaging with our overrated needs. I hope that future architects will appreciate the value of nature as an aesthetic element in their work more than they already do. I hope that cities all over the world start to demand such a change of their appearance and I hope that humanity in general will change to the better sometime, even though I might not witness such a change.