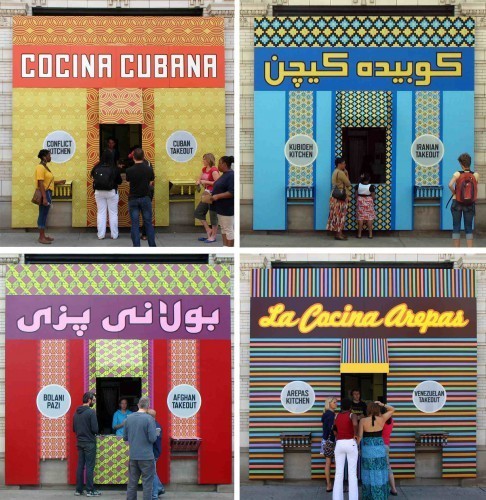 The interdisciplinary artists Jon Ruger’s and Dan Weleski project called The Conflict Kitchen has really inspired me to write this review. This self-funded art project was started in 2010 and is still going. Jon Ruger collaborated with other artists, graphic designers, activists and culinary directors to create a triggering, open and educational environment. Let me talk a little bit more about this project.

The project is called the Conflict Kitchen and is located in Pittsburg. It’s a take-out restaurant, but not your normal hipster juice bar: it’s a restaurant that specifically sells the cuisine of the countries with which the United States are in conflict with. The restaurant has already had the cuisines of Iran, Afghanistan, Palestine, Cuba, Venezuela and North Korea over the years. With every different country they conduct a two-year research on the (street) food culture, the markets, the agriculture and so on. Their graphic designer also adapts the banners, wrappers and graphics to the country itself, so that every iteration has its own unique character. They also organise events, festivals, performances, educational courses and interviews. They regurlarly invite guest Instagrammers and make books that contain interviews by kids that come from the conflicted areas. The food wrappers have short personal stories printed on them, by immigrants or indigenous people from those countries. Each one of them tells a unique story about their life back home, life in America, politics or anecdotes that give a deeper understanding of the people and the culture.

It all started as a collaborative between Ruger and Weleski. They noticed that there was a lack of representation of an ethnically diverse group in Pittsburgh, especially in the East Liberty neighbourhood. The Italians-Americans have their own neighbourhoods just like the Hungarians; the black community has theirs and so on. The city is very sensitive about its ethnic European history and current immigrant population. Xenophobia around the muslims in the city is also a big issue.

Weleski says: “You don’t find a lot of strangers on the street talking about politics, even among friends and family. We wanted to find out, is there a way we can engender that curiosity in people?” Ruger and Weleski figured out that food can be a methodology for bringing different people together and creating new relationships. They listed a lot of culinary styles and cultures that weren’t expressed in the city, and that is where the Conflict Kitchen started. They wanted to create a space where you can openly engage about sensitive political topics, while also enjoying great and new food.

“Almost all of our work as artists happens in public spaces and is participatory in some way. It’s about a reciprocal relationship between the audience and the artists, in which the artist is adjusting the work as it moves through time with the audience members, engendering a sense of curiosity but also making them a little uncomfortable. There is a push and pull,” says Ruger.

Right now they are focusing on a group of Native Americans that have their own confederation and are being threatened by the American government. I think the fact that give (in a indirect way) a platform to minority groups is really important. There are issues that need to be talked about and this is a way to educate people that normally wouldn’t have taken interest in these subjects. If you eat ‘unfamiliar’ food, you would want to know what it is, where it came from, etc. Therefore food is a natural conversation starter.

This is what makes this project contextual, transformative, artistic and participatory all at once. It explores the political climate of those countries that are not represented in a positive nor objective way by the media; it creates dialogue with the public in a natural way. By learning about the food, you can learn about the people, the history, the culture and the way of life. This all stimulates the engagement the public has with the country and its issues.

I think the graphics also add a lot of character to the project and they bring everything together. It sparks interest especially since they change the graphics every time. People want to know the stories behind the wallpapers. The restaurant rotates identities in relation to current geopolitical events, which makes the restaurant relevant. This is a great example of transformative design. Politics change and so does the restaurant; they keep the conversation going.

The wrappers add such a meaningful layer to the project. It makes it personal and detailed. They also host dance classes and have cooking lessons through Skype. The food is made by people from the conflicted areas… How more social can it get?

I think the only threats are the obvious ones; there might be some narrow-minded and butt hurt people that can’t find the beauty of this project and are upset that you have to eat couscous instead of white bread. Maybe it will set up some heated discussions, but I think the greater good is way better than any narrow minded discussion.

“We try to create a space where you don’t just inherit opinions over and over again, but where you’re constantly challenged and come to a larger understanding of the world,” says Weleski. “We want to humanize this conflict that exists between our governments and bring it back through everyday life. The easiest way to do that is through food.”

Couldn’t have said it better myself.