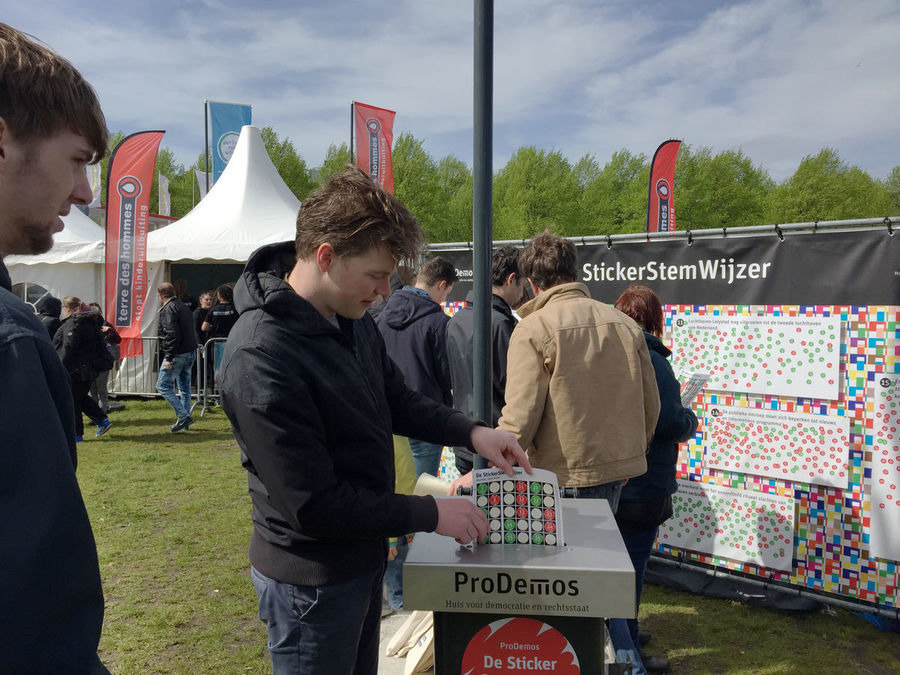 Six years ago I was worried about the populist style of communication of certain politicians. By making clever use of the 'voice of the people' these political leaders were able to gain a great deal of support in a short period of time. I asked myself, 'can I, as a designer, do something about this?' At first an anti-campaign seemed like the best solution, but then I saw that other such attempts by artists such as Jonas Staal had only brought the populist movement more media attention, and with that probably also more votes. I formulated the following research question: which interactive communicative tools can a designer come up with to inform the public about politics? I've become increasingly convinced that the best way to really reach people is to involve them through their actions, to give them authorship of their own choices. And this is something that can be done using interactive cross-media tools.

In 2013, ProDemos: House for Democracy asked me to design an interactive tool to communicate complex information about politics. The aim was to involve more people outside the walls of the institute. Before that, ProDemos mainly distributed flyers at festivals to inform the public. We (DRS22 and Studio Renate Boere) came up with an interactive installation based on the popular Vote Match websites. At festivals or in the city hall, citizens could use a sheet of stickers ('agree' or 'disagree') to voice their opinion on a large installation (3 large canvasses). This format also encourages discussion between participants who have never met each other before. After completing this task, users inserted their used sticker sheet in a scanner. The result is a personalised voting advice. In the video you can see how the 'StickerStemWijzer' works. The 'StickerStemWijzer' (StickerVoteMatch) became very popular. Since 2014 there is also a German version, the 'Wahl-O-Mat zum Aufkleben'. Peru is also interested, and there are serious negotiations going on with Mexico and Brazil – something I could never have dreamed of.

The importance of a network

How did it all get started? Together with four other enthusiastic teachers, I proposed this question to second-year and third-year students of graphic design at the Willem de Kooning Academy. This resulted in 120 different ideas for informing the public about politics in new and innovative ways. In that same period I had a conversation at an opening with one of my clients from the cultural sector, the director of the CBK Dordrecht, Gerrit Willems. I told him about my irritation with populist politics and also about the idea that 120 students would work on this research question. He was very excited about this. He also was worried about the increasing popularity of the populist parties, and he promised to provide me with a platform at the CBK Dordrecht, just before the 2010 municipal elections.

Timing and distribution through the media

The exhibition was titled 'What to Do?' The 25 best projects were rewarded with a place in the exhibition, which took place just before the 2010 municipal elections. Because of the timing, the exhibition received a great deal of media attention. Radio and newspapers covered the story and the exhibition gained a great deal of national publicity. One of the employees of ProDemos heard about the exhibition and was very enthusiastic after seeing all these ideas. ProDemos (which at that time was still the IPP, Instituut voor Publiek en Politiek), mainly focused on academic research of citizens and politics. The government had recently commissioned ProDemos with the task of informing citizens about politics. It was a coincidence that the transformation of this institute was really well-timed with my motivation to inform the public about politics in another way than what was happening at that time in the media. Following a request by ProDemos, we organised a special evening in the CBK Dordrecht to explain the 25 projects. Two projects to be realised were then chosen by ProDemos. The 'StemWijzerwinkel' by Marianne Blokland and the 'Politieke bijsluiter' by Thijs de Jong.

Thijs de Jong started his research with the question: How does our political system actually function? He realised that he knew very little about the structure of the Dutch political system. What is the function of the 'Eerste Kamer' (Senate) and what is the role of the 'Provinciale Staten' (Provincial Parliaments)? He found out that it was nearly impossible at that time to find clear and structured information on these questions. It became his mission to provide a clear insight into the Dutch political system, using a minimum of words. It was his ambition to make a political information sheet (similar to the information sheets supplied with medications) which could be included with every ballot paper. Unfortunately this has not yet happened, but Thijs, together with ProDemos, created a political information sheet for use as educational material in high schools. 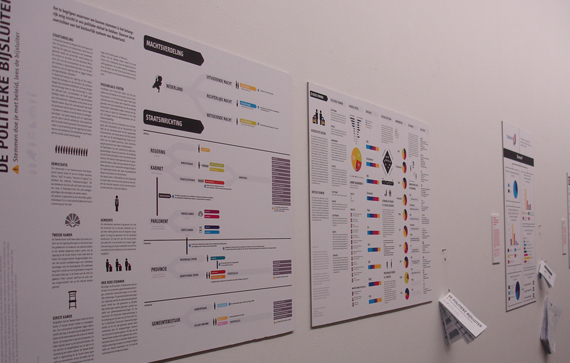 Marianne Blokland wanted to do something on the internet but at that moment she couldn't find anything she was really interested in, except the idea of online shopping. I suggested that this was actually a very good idea; the possibility to shop between the programme positions of different political parties. The online shop never came to life, but when Marianne heard about the opportunity to exhibit her work, she really wanted to make a physical shop. She designed a shop where you can choose products that each display a different position from a different party. As a consumer you choose the products with the position that fits your preference. When you 'pay' for your purchases, you place the barcode in front of a scanner and your political preferences are printed on a ticket. We professionalised this shop for ProDemos. ProDemos: House for Democracy developed a centre of expertise with 5 floors and even a replica of the 'Tweede Kamer' (House of Representatives, the main chamber of parliament). This centre can introduce 200 students a day to politics in a variety of ways. There are also exhibitions, workshops and lectures for all kinds of audiences. 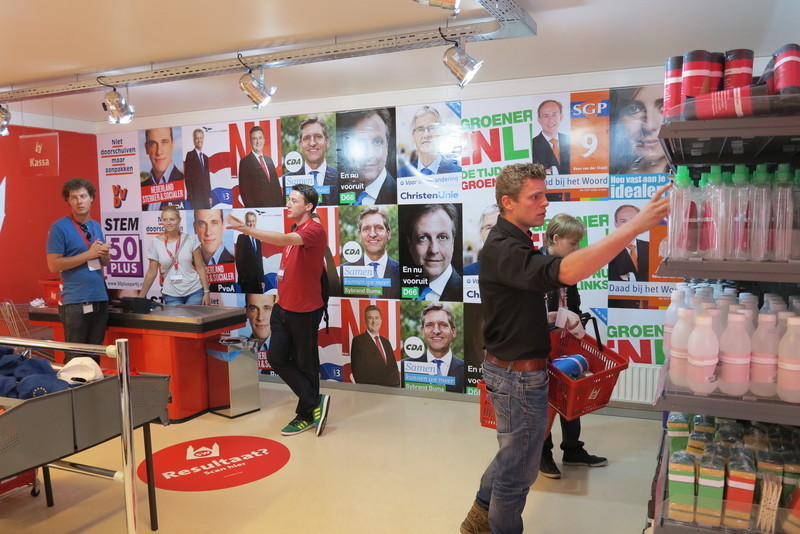 The importance of working together

As an artist or designer it is crucial to work together with multiple parties when you want to reach a large audience. Parties that will expand your decisiveness, such as the WdKA; parties with a public function, such as the CBK Dordrecht; an external specialist who knows all about the latest technical possibilities, such as Michael van Schaik; young designers who know how to reach the younger generation, such as our students and also my trainees Silke Kuilman (DRS22) and Leonie de Ruiter (Studio Renate Boere); and last but not least, parties that have the know-how relevant to the topic in question, such as ProDemos. But the most important party is the one that pursues the same goals as you. Without ProDemos I wouldn't have been able to reach as many people as I did. This research has led to many different projects and lectures within the context of politics and design.

Interview about political posters in the Volkskrant http://www.renateboere.nl/2012/09/04/interview-volkskrant-over-het-ontwerp-van-de-verkiezingsaffiches-2012/