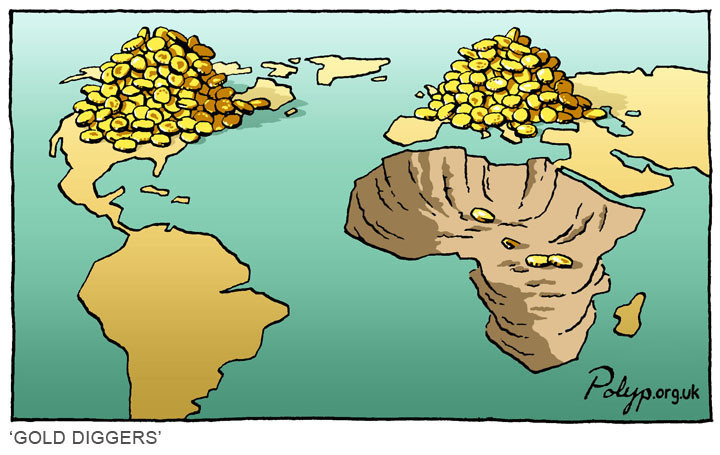 The debt rich countries have towards third world countries.
This article explains the ecological debt and the role colonies played when these debts were created

The ecological debt is about rich and wealthy countries owning a debt towards poor countries. After the period of colonisation and the industrial revolution the North, as described in MEME WARS : all industrialized states in Europe, the Americas and much of east Asia) were able to have a massive economic growth by exploiting and polluting third world countries. We became wealthy by taking away other country’s wealth. To understand the debt, it is also important to know more about wealth itself.

When looking at wealth it is hard to find a description of what is seen as wealth and what is not. Lots of times wealth is only shown in terms of money, however wealth can be way more. Wealth can be divided into two different parts; tangible and intangible wealth. Tangible wealth is shown into physical things which are seen and easy to quantify. An example would be; someone is very wealthy because he has a lot of money. Intangible wealth is not physically existing. However it is still valuable. Intangible means immaterial, unseen and not easily quantified. While tangibles are quantified, intangibles are qualified. An intangible wealth could be a personal trade such as your honesty, but also human rights or biodiversity. True wealth is having an abundance of what you value most, which can be money, but it can also be a healthy lifestyle. During the economic growth the only wealth which was looked at was the tangible wealth. Money is the main aspect in the current economy. Most of the time it stands above our values, however if we want our wealth to grow even further, it is important to be more aware of the way we live, how we produce and how it affects our society and environment.

The way the economy is set up now revolves around tangible wealth. The intangible wealth like nature, biodiversity and human rights are all subject to making money. Creating the ecological debt.

An interesting and relevant example of exploiting ecological surplus nations is the V.O.C. the Vereenigde Oostindische Compagnie. In the 17th century, dutch traders found a new economy in trading goods such as spices, sugar, coffee, tea and porcelain. They discovered trade routes to Africa and Asia, and became the biggest trade company of europe. This period in history was seen as the golden century, because it was the beginning of our tangible wealth. However it also came hand in hand with slavery, colonization and inequality.

With the V.O.C. came colonisation. The cambridge dictionary definition of colonisation: Colonisation is the act of sending people to live in and govern another country. When a country colonizes another country a lot of damage is done to the people and the planet, resources and people are exploited. To repair this damage the concept of colonial reparations appeared. The cambridge dictionary definition of reparations: Reparations are payments made by a defeated nation after a war to pay for damages or expenses it caused to another nation. In the article “Colonial Reparations - Historia” by Hendri F. Isnaeni they look at the past of the V.O.C and the history between the Netherlands and Indonesia. You could say that still some colonial reparations haven’t been made. On the contrary, Indonesia has used their money to help fund the US Marshall plan to reconstruct the Netherlands fast after World War II. To acknowledge the colonisation of Suriname, The netherlands paid 50 billion euros as a settlement for slavery. However towards Indonesia, the Netherlands only expressed their regret. You could say that the Netherlands still has some colonial reparations towards Indonesia because they didn’t make any payments. However the government of Indonesia decided not to ask for a payment because they see value in more than just money. There are more ways to use the ‘regret momentum’ of the Netherland to improve diplomatic relationships between the Netherlands and Indonesia, which in the end was considered more beneficial towards Indonesia. Besides seeing the value in money, Indonesia saw the value in a trade relation, investments and social culture. So in one way you could say the colonial reparations are made, not through payments, but through helping and supporting Indonesia.

When looking at climate change, and the effects it has on our planet, it is shown that the less developed countries, the ecological surplus nations, are affected the most by natural disasters. In the article “The Cruel Irony of Climate Debt.” by Francesco Bassetti they say that since the 2000s, there have been more natural disasters than ever before. Besides natural disasters, climate change is also causing a lot of problems for the development of ecological surplus nations. Problems like lower agricultural output, reduction in the productivity of workers due to heat exposure, slower investments and damages to health. These countries often don’t have the resources to adjust and rebuild, however they have to pay more for adaptation, recovery and redevelopment loans. The whole process of the ecological deficit nations causing climate change, and the ecological surplus nations having to pay for the consequences of a problem they didn't cause is the climate debt. It has been a problem in the past, and is still a problem in the present.

To change the way of treating the ecological surplus nations, change is needed in the way wealth is seen. The commoners have created a new type of wealth; care wealth. In the book Free Fair and Alive The Insergent Power of the Commons By David Bollier and Silke Helfrich they explain care wealth. Care wealth is when people take care of forests, water, or urban spaces. These become part of their shared memory, culture, social lives and identities. Instead of producing goods or commodities, they become representatives of things, living systems, and relationships that are the focus of affection, care, shared experiences and emotional attachments. A market resource has a value which is defined by the price, however with carewealth the value is defined by memories, meaning and special feelings because people have dedicated their time and effort in it.