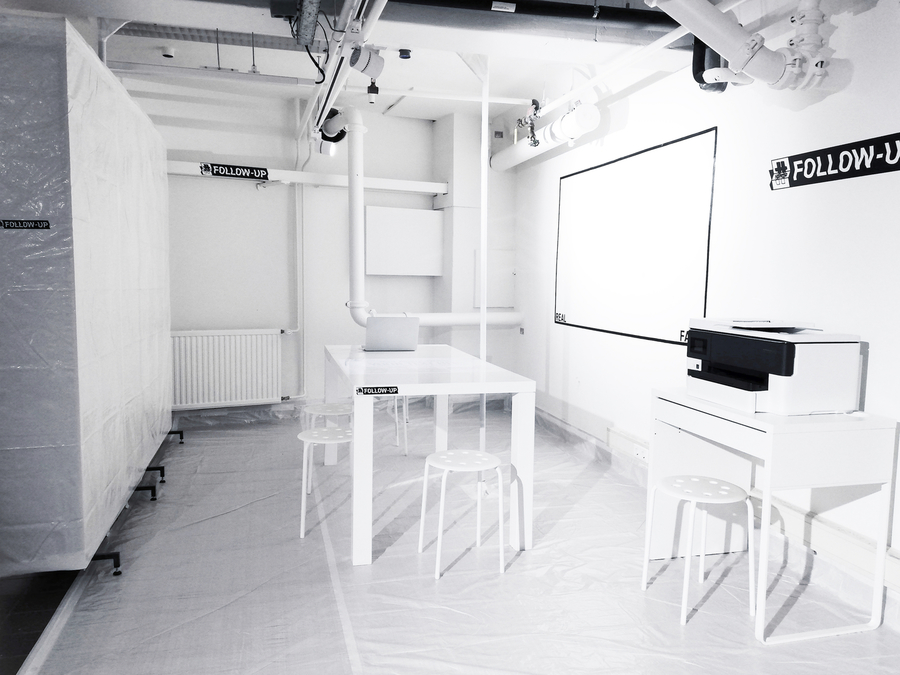 The future role of a graphic designer in the context of fake news.
#FOLLOW-UP is an editorial office where news will be created by the news consumer. The office contains 6 jobs: witness, journalist, image-editor, text-editor, artdirector and me as graphic designer will be the proces supervisor. Everyone participates from a certain role: hoax, trolling, information, propaganda, satire and humor in order to learn more about the different perspectives of news. The editorial office is a structured collaboration to create news. First the witness sees a short video, the journalist asks questions to the witness in order to write a text, the image-editor adds images, the text-editor writes a title and the artdirector shuffles all the content in order to create the news page. After 15 minutes of collaboration the created news will be printed out and shared on facebook.

Graphic Design has an important part in transferring information to it’s reader because the purpose of the content must be comprehensible to the target group. News sources such as NOS (Dutch Broadcasting Foundation) spreads information and have the intend to be reliable for the news consumer. Due to a fake news item spread by NOS, the design of the message was not clear wether it was real or fake, because NOS itself was not aware of this either. The design of real and fake news has the same appearance which makes that design is longer a reliable factor for the news consumer. The assumption I tested within my research is that the role of a graphic designer can no longer be the same due to the rise of ‘fake news’.

Through prototyping I discovered that a group of people was able to distinguish real and fake news. The method I used was called ‘mass innovation’. This method led to the research question: How can I, as a graphic designer, use ‘mass innovation’ to make news consumers playfully aware of the influence of design on the reliability of news?

Design itself appears to have no influence on the reliability of news. It’s not in the appearance but in the system behind it, the creation. I have discovered that a combination of the methods ‘Open Design’, ‘Mass Innovation’ and ‘Cadavre Exquis’ offer many opportunities for the role of a graphic designer. By involving the news consumer in the process, an outcome will be created that contains multiple perspectives. This will make information much more reliable than when it’s colored by only one perspective by a subjective designer.