Self organisation in urban commons networks 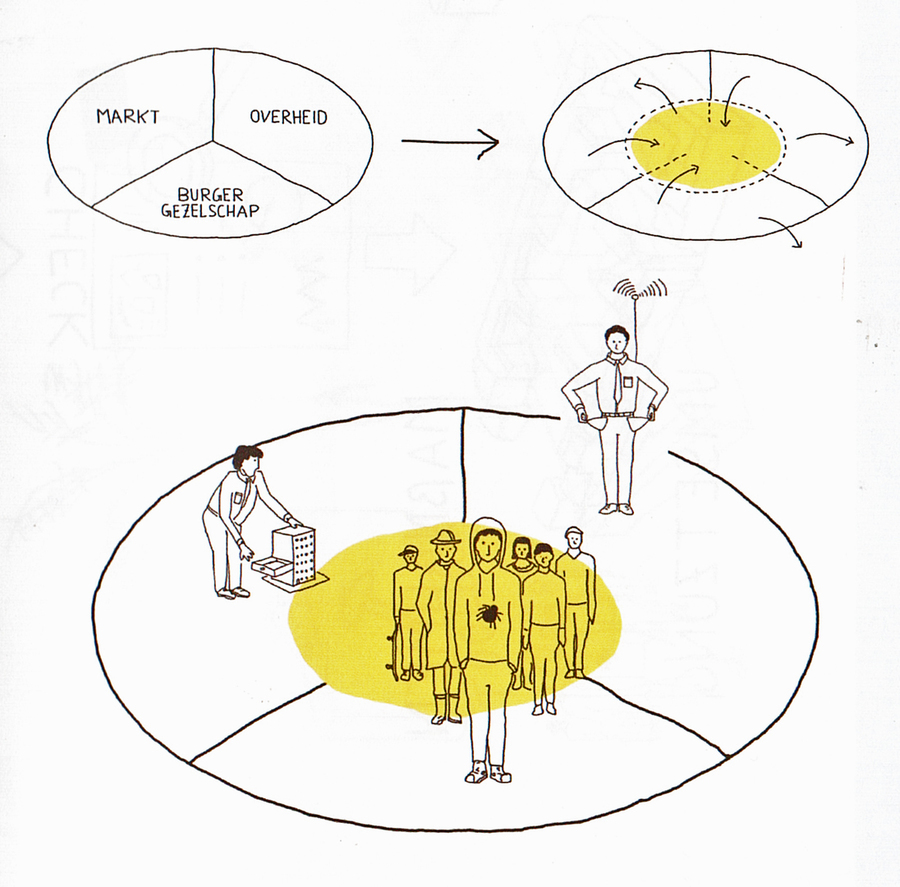 “In the neighborhood of Delfshaven you'll find a social foundation under every street tile” according to Minister of Social Affairs Hugo de Jonge in his period as alderman in the city of Rotterdam. The area with 75.000 inhabitants is in terms of the neighborhood index (income, safety , etc) comparable to some the worst performing neighborhoods in the south of Rotterdam but with one major difference: It is -even compared to other national and European examples- exeptionally rich in citizens initiatives. The hell is going on there in the west of Rotterdam? And what role do social designers play in these networks?

Maybe you've heard of it. People form Spangen flipping over cars from drugrunners in the 90's. The municipal government giving away DIY houses for free. The City Marines (stadsmariniers) act as front soldiers in district-oriented work. Opzoomeren as a binder for the street and the city. The co-creation festival of Mooi Mooier Middelland. All social innovations that have come to the surface in Delfshaven's open urban laboratory.

Mixed neighborhood avant la lettre. The roots for this collection of neighborhoods as a collective breeding ground go back to the very beginning of the district in 1887. It was director of municipal works G.J. de Jongh who drew A-, B- and C-streets in Middeland and Nieuwe Westen in the tracks of the expanding port and the annexation of Delfshaven. The well-to-do bourgeoisie on the Heemraadsingel and the Mathenesserlaan, the middle class on the Claes de Vrieselaan and the Nieuwe Binnenweg and the working class in the streets in between. This created pleasant fine-grained neighborhoods where the director and the worker could meet each other at the butcher's.

Despite this, in the 1980s and 1990s it could not be prevented that the neighborhoods were torn down by urban renewal, allocation policy, white flight and drug epidemic. On the drug axis between Perron 0 and the prostitution zone of the Keileweg you could find all kinds of things; from drug dens to indoor weed farms to addiction care. It was the excesses of needles on the street and junks in the porch that brought residents together to put an end to the Wild West.

The opportunity of crisis. Over the course of many years a strong culture of activism and DIY mentality has been engrained in the neighborhoods DNA. The financial and economic crisis 2008 was an other shock to the system; through austerity measures neighborhood centers had to close, youth and language programs were cancelled and many people lost their jobs. People who had the least were picking up the bill for a crisis caused by people who had and have the most.

Because of the resilience and ingenuity of the people in Delfshaven a lot of citizens initiatives emerged on the opportunity's left by the crisis. Community parks on vacant lots like Spoortuin, Proefpark de Punt and Tuin op de Pier, citizens-led Buurthuiskamers (communal places) in empty buildings like Wijkpaleis and Leeszaal West and initiatives like mowing grass with sheep in Spangen and programming a park with Singeldingen.

The avant garde was a mix of different people; among them activists in womens emancipation, designers and architects reconnecting with society, sociologists and philosophers putting theory into practice, layed-off but entrepreneurial welfare workers and enlightened civil servants. Let's call them city-makers.

All these initiatives provided an alternative for the failing and shrinking social infrastructure in the neighborhoods of Rotterdam West. The (social and economic) resilience of people and organizations enabled them to develop new places and programs of meaning; with pragmatic idealism and hybrid business models, across disciplines and with the power of personal and communal passion. Each initiative can be seen as a small prototype of a new society. Where the relations between work, care, capital and the meaning of life are redefined.

This is a worldwide movement where hyperlocal forms of direct democracy provide an horizontal alternative but also an enrichment of the more hierarchical and vertical parliamentary democracy. In the words of David van Reybroeck -author of 'against elections' the next transformative decades will be defined by hybrid political systems. And that they are. From the participatory budgeting in Porto Alegre, the Occupy movement, the Municipalismo of Barcelona en Comu, the G-1000 in Brussels and the Mooi Mooier Middelland co-creation process in Rotterdam; all of these experiments give people more influence, grip and trust in their living environment in an even growing complex and out of control world.

System world vs. personal world. But the way these new initiatives are organized -in fluid networks, based on trust, across disciplines- often clash with the way the bureaucratic worlds operate. The service systems we built as a society have grown much bigger in the last decades and are often are based on distrust solidified in tenders, Key Performance Indicators and accountancy statements. It's difficult for small local initiatives who are trying to reclaim the public to play by the same rules as multinationals or ever-merging organizations. And vice-versa it is not in the nature of municipal governments to deal with this myriad of small initiatives who never seem to fit in any of the preformed molds. So how do these two worlds collide or come together?

In working as a elected representative in Rotterdam Delfshaven for the last four years I noticed the rise of a way to mediate between the top-down and the bottom-up. Let's call it the emergence of meta-networks. Collections of active citizens and initiatives that cluster around a certain theme of place that matches with the organizational compartments of the systems world. In this way local initiatives could maintain their own identity without having to 'scale-up' and the city wouldn't have to talk to each and every initiative.

Let's get to a number of concrete examples. What kind of networks are we talking about?

WIJ Delfshaven, Politics. In 2013 a non partisan political platform arose from the network of active citizens in Delfshaven. The idea behind it is that local initiatives have the most fine-meshed networks in neighborhoods. By connecting these initiatives they could become productive in sensing whats going on in the capillaries but also in disseminating policy into programming on a local level.

Delfshaven Lokaal, Local Welfare. A budget of 3 mio euros for welfare in Delfshaven is usually tendered to a large welfare organization. While a lot of local initiatives in West also provide welfare such as activation, talent development and community building. By lobbying for Couleur Locale and making the complex tender rules insightful for small initiatives they now get 25% of this budget.

Groene Connectie, Green Initiatives. On the derelict train tracks surrounding Delfshaven after the harbor moving westwards a number of green initiatives appropriated the terrain vague to make community gardens and parks. From the Dakpark to Essenburgpark, Singeldingen and Tuin op de Pier these green initiatives united themselves to make a ringpark that could become the green backbone of current en future inhabitants of the area.

Delfshaven Coöperatie, District Development. This neighborhood cooperation is a collaboration between active citizens in Bospolder Tussendijken and the municipality, Housing corporation Havensteder, Rabobank, Project Developer Era Contour and the City-Mariner. With a focus on entrepreneurship this partnership works on integral (physical, social, economical) development of the neighborhood.

Huize Middelland, Distributed community center. Instead of one big welfare company-run community center the neighborhood of Middelland has a collection of citizens run meeting spaces ranging from an islamic organization, a christian place, a park, youth group, the Zorgvrijstaat West and the Wijkpaleis.

West Practice, Talent development and work. For a lot of people with distance to the labour market is to big to bridge with one step. By empowering and connecting a local network of initiatives en company's to offer activations programs, volunteer work, learn-work places and jobs people can use local stepping stones to develop their skills.

From Mercedes star to a sunny side up egg. All these networks interlock because quite a number of key figures (or boundary spanners) act in different groups. In this way information and experience gets distributed and the ecosystem as a whole becomes reflexive, self-organizing and a collaborative social innovation environment. In the aggregation of meta-networks a scale emerges that is strong and big enough to be a counterpart to government and business.

One of the key pivotal moments in this development was the inspiring vision that Klaus Overmeyer posited at the City-maker Congres of 2013 in Rotterdam. By noting that the process of city-making is not beholden anymore to the 'usual suspects' and everyone could be a city maker he gave meaning and direction to a lot of bottom-up initiatives.

Implications for the future. The rise of a bottom-up ecosystem to citizens-driven meta-networks poses challenges for the way our society is currently organized. Combined with the UN Sustainable Development Goals it elicits changes to our representative democracy, the way we do business, how we educate our children and who owns the city. There are a number of different methods to facilitate this process, from participatory budgeting to co-creation and neighborhood cooperations.

One of the most interesting forms is that of the citylab; an environment where different stakeholders horizontally interact around a theme or a place. This form creates a (temporary) playing field with a set of rules where interaction, innovation and impact can arise. The work process is similar to how local initiatives operate; horizontal, experimental and transparent. Civil servants find leeway from their pinching job description. And companies and businesses can contribute technology, development capital and perseverance power.

It is interesting to see how Rotterdam West develops in the coming years. Can the local community evolve to an inclusive ecosystem that does not divide people into winners and losers? Can citizens become more resilient and social-economic independent? Is the energy-transition a catalyst for democratization and social added value? Want to join and contribute? You're welcome to jump in the egg yoke and muck around!