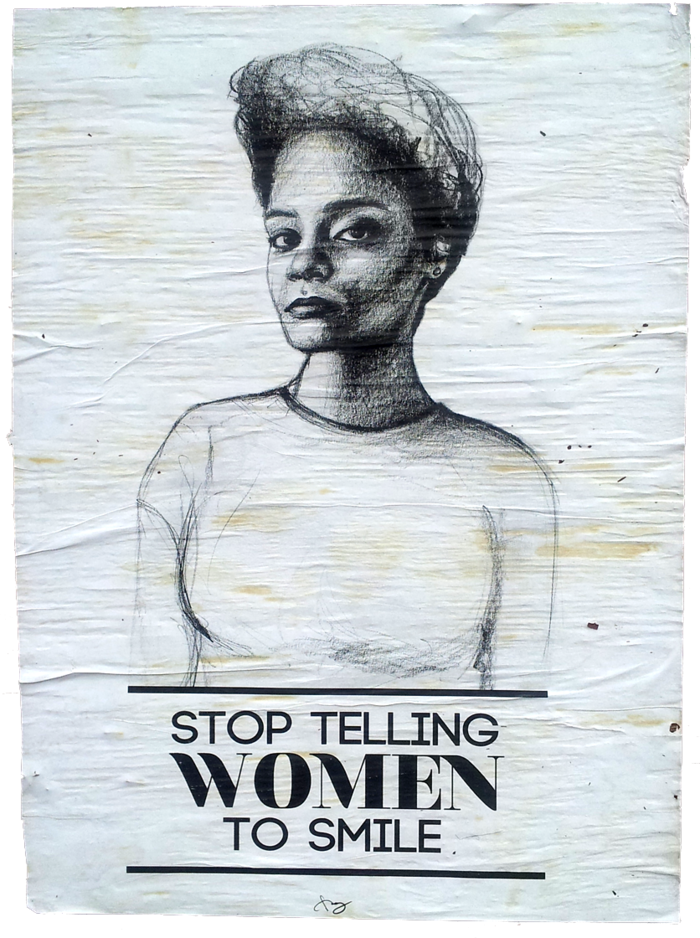 Stop Telling Women to Smile is an art series by Tatyana Fazlalizadeh. The work attempts to address gender based street harassment by placing drawn portraits of women, composed with captions that speak directly to offenders, outside in public spaces.

The project ‘Stop Telling Women to Smile” is still an ongoing project. The series travels through different states and even countries. This is what makes the project very transformative and participatory. It can be used for different women who have had different experiences. And it gives all these women their own voice. Tatyana Fazladizadeh takes women’s values and faces, and puts them in the street. By that, she creates a presence in the places where they feel unsafe.

The starting point of this project is very artistic, using the portraits of the woman as main focus. The artistic level stops right there. Although it is an ongoing project that is traveling the world, maybe there could be more time spent on how to evolve the posters she is putting around. Maybe the black and white posters work very well in one neighbourhood, but are totally ignored in the other neighbourhood. She could have looked more at the different types of colouring and printing.

Nevertheless, I think this is a very good social art & design project. Many women feel objectified and demoralized everyday, even here in Rotterdam. But we all take this behaviour as normal and acceptable. Laura S. Logan, an assistant professor of sociology at Hastings College in Nebraska, who has studied catcalling for years says that research shows that is a problem affecting how women get to work, when they go out and how they dress. We’re being shown for the impact it actually has on us and Tatyana is helping to make it stop and create more awareness for women to stand up for themselves. Women’s bodies are consumed and are considered public property for display, comment and consumption. Another reason I think this is a very good project is that it gives women a face. And by giving them a face, other women can faster relate to their problems and by that feel more encouraged to stand up for them selves whenever they feel harassed. It makes them feel that is isn’t normal, and that it is okay to participate in the fight against this harassments.

However, I do see some weak aspects of the project. I think it could be better, but better by many different little things. The overall context of the project is really good, but it needs to be more detailed. For example, by drawing them they characterise the women. I think this is why men won’t take it serious enough. They don’t see them as an example for a real woman. They also don’t look angry or sad enough. And that may seem as an irrelevant thing, but the human being simply need to literally see the sadness or anger on someone’s face, otherwise they think that they aren’t sad or angry enough to see it as a real problem. This is why men are still a thread for the project. It is all up to them to see this project as a relevant thing. And I don’t know if only posters on the wall can accomplish this. They’ll probably see it and don’t feel addressed at all.

But, where there are threads and weak aspects, there also lies opportunity’s. Why not make different STPTS Teams all over the world who can give this project more attention all over the world. So, for example, why not make a Rotterdam STPTS Team who can photograph the different faces of Rotterdam women who are harassed every single day. Display their faces on a huge A0 poster and put it out on the streets and neighbourhoods where they feel uncomfortable? When this project lives to it’s full potential, it can change the world. It can change the way men objectify women.

Finally, to end my review in a way of recommendation. Encouraging conversations between men and women about street harassment and how it affects women physically, mentally and emotionally stays difficult, but if Tatyana gives her women more identity by adding colour and more facial expression the message will get more noticed and become more powerful.