THERE IS POTENTIAL. ACTIVATE CHANGE 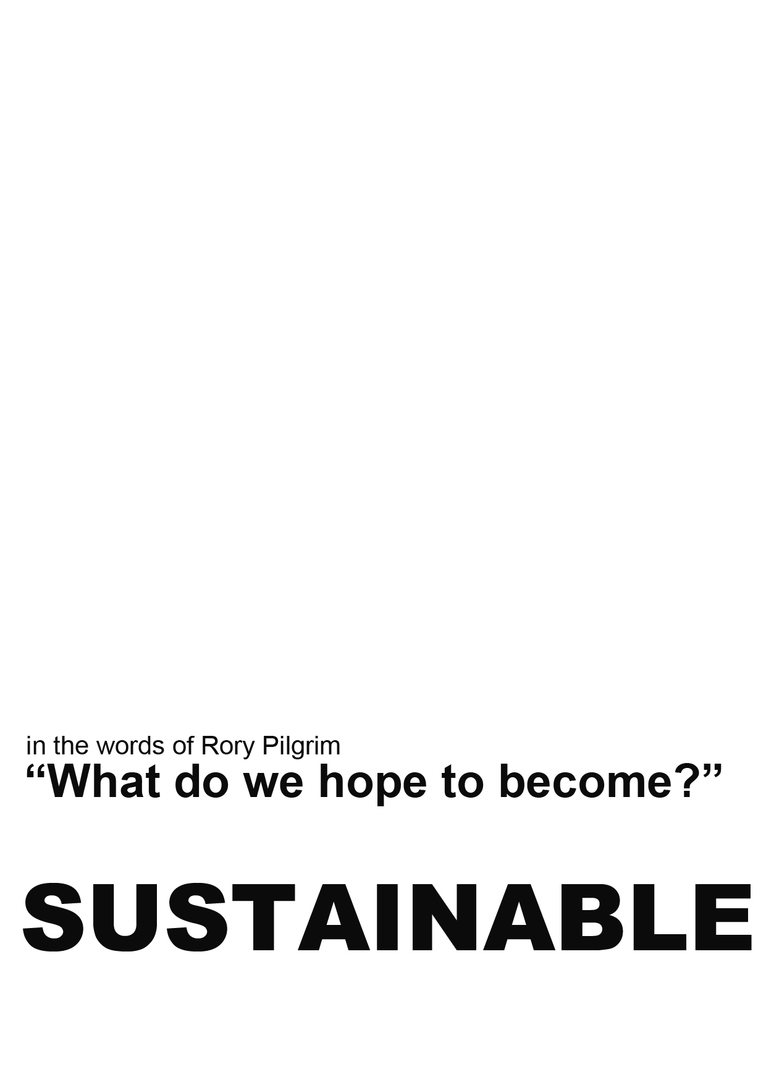 "be the change you wish to see"
An essay about provoking change with social design discussed in the topic of sustainability. It features an analysis of why a sustainable future is needed, where the problems come from and examples of projects aimed at creating one. By Alice Evans

It’s easy to adapt yourself from within but how can others be changed in the outside world? Design has always proved to be a driving force of changing society, playing a big part in developing the world we live in. Since the birth of modernism at the turn of the 20th century it has heavily shaped the world, impacted how we live our daily lives, how we use things, what is manufactured and considered trendy, therefore what we buy. From design, came consumerism and a materialistic world never satisfied by what they own. The advances in technology and science meant materials and raw resources could be adapted in new ways making it easier to produce and therefore consume and in turn use, throw away and replace. One of the biggest advances came with the birth of plastic: first being used on a mass industrial scale to satisfy a trend of futuristic aesthetics from the 50’s and 60’s. Then, blissfully unaware, the future environmental impact was never considered. The consequences of the past 50 years of consumerism can be seen in the growing ecological crisis of the modern world today; a world near breaking point. Issues such as global warming, deforestation, pollution of air, land and oceans and an ever-growing population with heavily depleting resources for food and energy, need solutions. As previously, the role of the designer can make a powerful impact to drive change, which is now needed more than ever. To change a problem you have to start with it’s core. One of the causes of the issues seen today is an overpopulated world trying to operate in a system that was developed when there were a lot less people. In 1800, the time when the industrial revolution began there was only world population of approx. 1 billion, 7 times less than today. The infrastructure designed then which has developed into the modern world we live in now, supported the economic system: harvesting raw materials to produce quickly and cheaply for maximum profits. Exponential growth has resulted in this system reaching its limit. It is outdated. Time to activate change and create a new one that doesn’t continuously drain the planet.

“A pool of possibilities”

Initiatives have already been taken by designers to begin this change for example Herman Miller opting for a cradle-to-cradle design on office chairs, a concept created by William McDonough and Michael Braungart with the approach that ‘being less bad is not good enough’. The afterlife of a product is considered in the initial design, so when it becomes unwanted, it can be fully disassembled and the raw materials can be re-fed back into the industrial cycle; similar to recycling however no material quality is lost in the process. This idea solves the waste problem of consumer society, proposing a more circular system and acknowledging there are only finite resources. The same circular approach can be applied to the whole economic system. With the idea of a circular economy, designers are pro-active in planning a whole life cycle for products, and utilising waste streams into being useful; rather than the linear cradle to grave approach seen in the current industrial system. In the BlueCity, Rotterdam, the circular economy is the driving force of business. Companies work together to create a zero waste economy. This is reflected in the office building itself: a disused swimming pool, quite literally a ‘pool of possibilities’. The underlying theory is to restore balance between what industry and businesses take from the natural world; a role model for future companies to show a circular cycle does work. To quote their website “this is where startups create a new tide, and where corporates can catch the new wave”, thus challenging the corporate system, and suggesting their way is better. One of the members of the BlueCity is Superuse studios, ran by 5 engineers who make effective use of wasted resources and energy. In a lecture at the Academy, social artist Sander De Jong spoke of his involvement in a project on the island of Brienenoord, where an arts/community centre was being taken down after being deemed unsafe by local government. Superuse Studios and a team of artists and volunteers have taken the building waste and are re-forming it into a brand new centre on the island. Inspired by his talk, I contacted Sander and now regularly go to the site to help in the re-build. This project is an example of how change can be made with a little extra thought and care for already existing materials. It is a very beautiful place for reconnecting back to the natural world just outside the hustle of city life, a reminder to why a sustainable future is so important. Another area where change is being activated is in Afrikaanderwijk, South Rotterdam, where my practice project is harnessing food waste of the local market to create cooking syrups; featuring packaging/labels made from recycling cardboard and plant fibre waste, with recipes and stories attached from who created the flavour. We plan to connect the culturally diverse area by asking residents for flavours and recipes that are typical of their home countries, and invite people to taste all the different cultures that surround them. Hopefully this will shift the mind-sets to respect and embrace the variety, helping the area flourish into a comfortable social place. We also aim to work in collaboration with the botanical garden also in the area to get herbs, market venders for the waste fruit/veg and the neighbourhood catering service to connect these groups within the area.

Yes, we are working with the waste to ensure we get the most out of it but it is coming from the same system. We can’t keep producing and thinking it’s ok to create waste because somebody will come along and use it. This is an illusion of change. The materials used in the first place needs to be more sustainable. There needs to be a whole innovation of materials. Seen in the exhibition ‘Change the System!’ at Museum Boijmans van Beuningen, Klarenbeek & Dros are developing natural alternatives to the fossil fuels used in materials and production processes. Being recognised in 2013 for 3D printing mycelium for a possible idea to replace plastic, they are now researching new biopolymers made from algae; algae grows by absorbing carbon with a waste product of oxygen. By linking this plant into the production process, instead of harming the environment with production, we could actually clean it. If a bio 3D printing lab were available to everybody locally, users would be directly involved in manufacturing their own products. This way perhaps people would be more inclined to keep their stuff longer with sentimental value of creating it themselves.

Revolutionary thinking shows we could live resourcefully, sustainably and harmoniously with respect for the beautiful planet we inhabit.

But how can this be achieved? We all must work together. These are small examples of how change has been activated for a better future. The power is in our hands. One small step for big consumer companies could mean a huge leap for change. For example if Nike, coca cola, H&M invested in the new materials being developed. But how do you make capitalist giants care about the environment, put their earnings in the greater good of the common world, over profit for themselves? WE determine what these companies produce. They make products to fulfil the desires of our consumer society. If we OPPOSE THE SYSTEM, show them that a sustainable future is what we want and what the world needs then maybe they will change to create one.

Soon there won’t be a choice. Fossil fuels and natural resources are running out. The system forgets when making so much money they are still part of the earthly commons. They need a world to make money on, we need a world to live on, our children need a world to play on and nature needs a world to thrive on, so if a sustainable future is not achieved then all we will be surrounded by is slowly decaying un-usable waste.

Is that what you want?

We need a system that has no limit.

There is the potential. Together we can activate change.

My Portfolio Link to my website with all my work