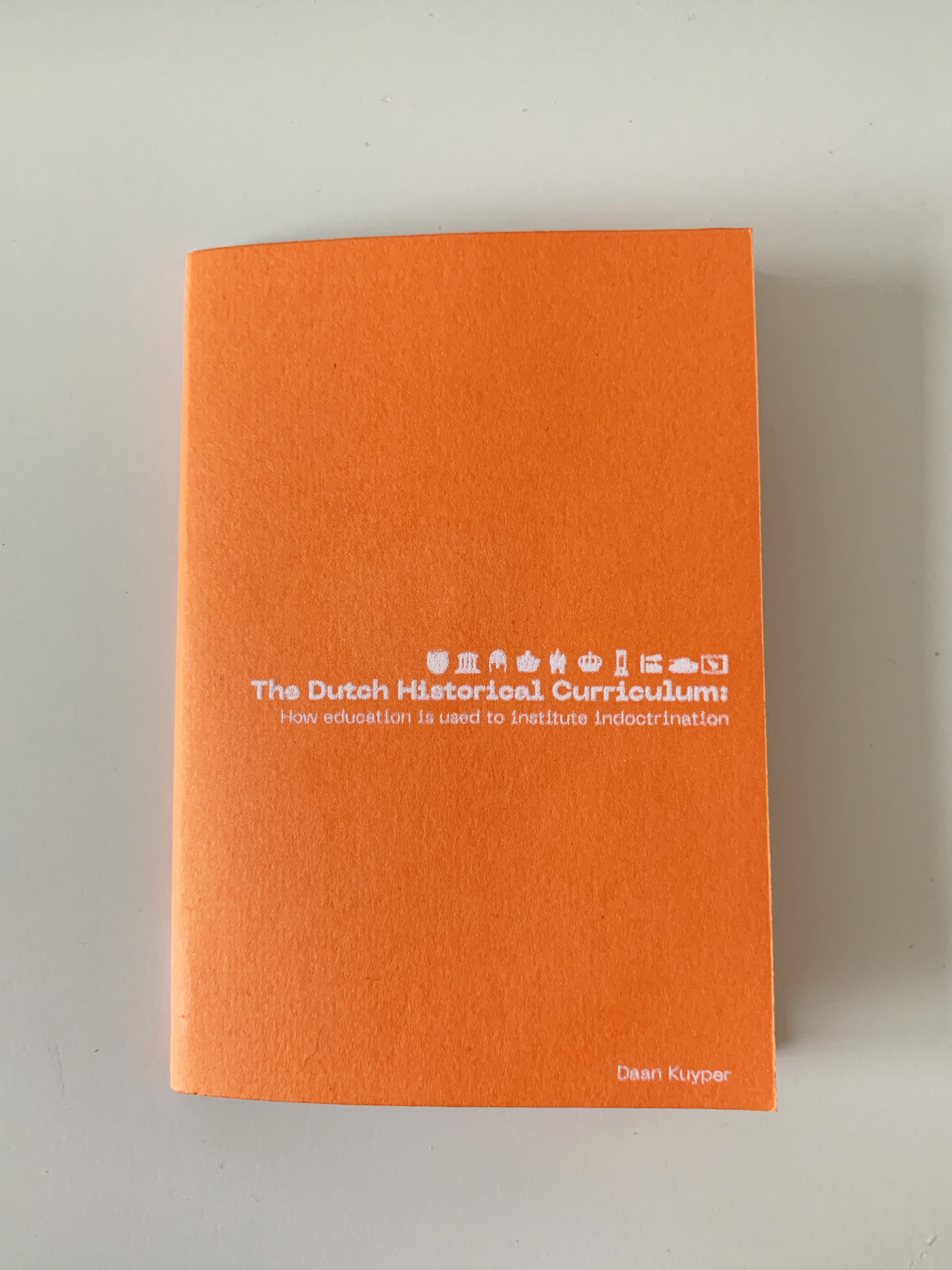 How education is used to institute indoctrination
In this essay I - a Dutch, straight, cisgender, white, male brought up in a small catholic community with a mother, father and a younger brother where I was always let to believe that this was the normative idea of what life looks like - want to analyse the Dutch curriculum and uncover the way the content of this curriculum is being used as a vehicle to form the national identity and it is cultural archive (I will later talk more about the cultural archive).1 When I was young I have always been in a very centralised position. This was something I did not consciously live with. When I was 10-11 I remember at the beginning of my school year we had a new student that was coming into our class. He was a Afghan refugee who had fled to the Netherlands with his parents, little sister and little brother. Very quickly we became friends. We were played during recess in school and met up after school at either his house or my house. Back then I had never learned anything about Afghan culture apart from the things I had heard on the news about the war. I remember going to his house and meeting his parents who did not speak Dutch as well as their son spoke it. They where so warm and inviting and I was invited to join them for dinner and ate things I never ate before. The most important thing that always stuck with me was how other classmates would behave towards him and would bully him for being different. I never understood why they did this up to a certain level. This awkwardness and struggle in interacting with other cultures is for me something that derives from the lack of information and different viewpoints. Something that shows Dutch people are being taught a very mono ethnic or mono cultural idea of the Netherlands. I recognised this in my classmates acting towards my Afghan friend. Because the Dutch historical curriculum would not tell anything about Afghanistan, for my classmates it was not part of Dutch history and therefore “not-Dutch”. This ties into my research question where I ask how can a change of the Dutch historical curriculum change the Dutch mono-culture.

I am going to start this essay with an example of something that is currently not in the Dutch historical curriculum. Knowing that this is just one of the many, many examples.

This is a small summery of the many texts on the Dutch concentration camp Boven- Digoel. In the years 1926/1927 nationalist and communist groups formed in Java and West-Sumatra against the Dutch colonists. While being wildly outnumbered in a ratio of around 60 million to 200.000 the Dutch realized they where in trouble.2 They panicked so much that they arrested over 13.000 people. Four of them even got a death sentence and were hanged.3 Around 4.500 people got a jail sentence of a couple of months and where released after. For the rest of the people it was unsure what their involvement was exactly so the Dutch colonists decided to put these people in a very distant and isolated camp in what was Dutch New Guinea. What was important to the Dutch is that the camp would look very ordinary. Like another “normal” Indonesian village. This is what became Camp Boven-Digoel. This camp was something that in other terms would have been called a concentration camp. Back then (from a colonialist fed perspective) the only thing that was known about the people that lived there - the Papoea’s - was that they where a savage species of people. They were only known for some stories by colonists that told they where famous for being dangerous be-headers. Reducing the Papoean people to something Agamben would define as “bare life” or “life which has been reduced to biology whilst the person’s political existence has been withdrawn by those who have the power to define who is included and who is excluded as worthy, sovereign human beings”.4 For this reason the prisoners of camp Boven-Digoel would think twice before trying to escape through the woods. The trip to the camp was a long journey. Because of the bad connections they took even longer to get from Jakarta to Boven-Digoel than to get from Jakarta to the Netherlands. In an act or true desperation the prisoners that where on the ships sometimes tried to jump of the ships and drown themselves.5 In some books written about camp Boven-Digoel like Louis Johan Alexander’s “Boven-Digoel” or I.F.M. Salim’s “Vijftien Jaar Boven-Digoel” you find horrible details of what was going on in this concentration camp that the Dutch called a prison camp. For example Salim talks about how from time to time a crocodile would come a shore and grab on of the prisoners to disappear in the water again. Their bodies were never found. Because most of the prisoners were wrongfully accused the camp is referred to in many books as a concentration camp. It is no different from the German camps in Amersfoort or Vught during the second world war.6

Analysing why stories like these are not a part of the Dutch curriculum starts with the way the Dutch historical curriculum is set up. In the Dutch government there is a department that starts the process of determining these boundaries. The first step for them is to ask a group of established historians to determine what the key periods of the Dutch history actually are. So the department of education has set a commission lead by Dutch, white, male, modern-history expert Piet de Rooy to determine what Dutch students should learn about the Dutch history. This commission had done this in the year 2001, which today is already 18 years ago. These 10 key periods in time according to Piet de Rooy and his team are for example (1500-1600) ‘discoverers and reformers’, (1700-1800) ‘wigs and revolutions’ and (1800-1900) ‘civilians and steam-machines’. Piet de Rooy’s commision also determined that the theory should be limited to European and western history. After Piet de Rooy and his commission were done, another commission lead by one of the most famous Dutch, white, male historians of the Netherlands Frits van Oostrom, added something to the Dutch historical curriculum. They determined a canon on the 50 most important Dutch people/objects/happenings in Dutch history. In 2010 this canon was a mandatory part of knowledge every student had to have in order to pass their exams.7

By the Dutch department of education there are 4 publisher who are allowed to print and publish books on Dutch history that are used for teaching the Dutch historical curriculum. These publishers are the next step in the process of creating the Dutch curriculum. The publishers choose writers to write about these ten time frames or key periods in Dutch history. These writers are very unlimited to what they “have” to write. Dutch, white, male History teacher Jan-Wolter Smit who is one of the writers that work for one of these publishers tells about what you have to write is just enough to write a couple of sentences about but not even closely enough to fill an entire book.8

When the texts are written and the Dutch history book has been designed, the books are printed. This process of printing can, depending on the technique take one week and up till 6 weeks or longer. I find it important to state this because printing a publication takes away some of the actuality and takes away the ability to change parts where necessary. In order to make sure that subjects such as the golden age9, The Dutch Drug Cartel9, the real involvement of the Netherlands in the transport and trading of slaves and slavery9, the importance of Jerusalem to Jewish people10, Dutch concentration camps in the former Dutch Indies9 and many, many more subjects that are currently not included in the books will be a part of the curriculum. Talking about analog books as a vessel to distribute important information in a time where computer technology is at the root of human existence and information is available in nearly all parts of society is something that should be obsolete. In this Information revolution11 something as important like a publication on history should be made to be changeable and evolving overtime instead of being a “screenshot” of a re-frame of a re-frame of a re-frame of a re-frame.

“Often when I have given presentations in the Netherlands on the topics in this book, people have asked me where this cultural archive is located: is it in Amsterdam or in Middelburg, the capital of the province of Zeeland, the site from which slavers left for Africa, their first stop on the triangle trade route? My answer is that the cultural archive is located in many things, in the way we think, do things, and look at the world, in what we find (sexually) attractive, in how our affective and rational economies are organised and intertwined. Most important, it is between our ears and in our hearts and souls. The question is prompted by a conception of an archive as a set of documents or the institution in which those documents are housed My use of the term refers to neither of those two meanings, but to “a repository of memory” (Stoler 2009, 49), in the heads and hearts of people in the metro pole, but its content is also silently cemented in policies, in organisational rules, in popular and sexual cultures, and in common sense everyday knowledge, and all of this is based on four hundred years of imperial rule.”(Wekker, 2016, 19)12

Questioning “commonsense everyday knowledge” such as the Dutch history books that I learned from when I was young is for me an essential part of what Dutch culture should be about. We need to break the Dutch idea of having to be this mono-ethnic and mono-cultural country when a big part of the people who live in the Netherlands do not feel identified by this unified Dutch culture12. As I, myself don not even feel represented or identified by Dutch culture being a Dutch, white male. So what I would like to propose is in order for the Dutch historical curriculum to represent it is diverse inhabitants it should show about history in a inclusive way where we look at the “Dutch history book” as a more fluid publication that changes digitally and is not set in the frame of the analog book. So that the Dutch historical curriculum will serve as a vessel for cultural inclusiveness and future Afghan friends are not being bullied for not “being Dutch”.