The story of stuff 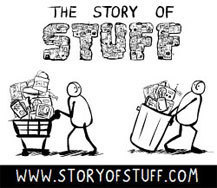 sustainable (new earth) animation
The Story of Stuff is a short animated documentary about the lifecycle of material goods. The documentary is critical of excessive consumerism and promotes sustainability.

The documentary is being used in elementary schools, arts programs, and economics classes as well as places of worship and corporate sustainability trainings.[4] By February 2009, it had been seen in 228 countries and territories. According to the Los Angeles Times as of July 2010, the film had been translated into 15 languages and had been viewed by over 12 million people.[1]

The 22-minute video presents a critical vision of consumerist society, primarily American. It purports to expose "the connections between a huge number of environmental and social issues, and calls us together to create a more sustainable and just world."[5] The video is divided into seven chapters: Introduction, Extraction, Production, Distribution, Consumption, Disposal, and Another Way.

The video divides up the materials economy into a system composed of extraction, production, distribution, consumption, and disposal. To articulate the problems in the system, Leonard adds people, the government, and corporations.

Leonard's thesis, "you cannot run a linear system on a finite planet indefinitely" is supported throughout the video by statistical data. Although the video itself doesn't give attribution to her information, the producers provide an annotated script that includes footnotes with explanations and sources for some of her assertions:

"... more than 50% of our federal tax money is now going to the military..." She cites the War Resisters League website, which differs from government reports that put the figure at around 20-25%;[6] WRL explains the difference in that it doesn't count trust funds like Social Security (since this revenue is not obtained directly from income taxes), considers veterans benefits as part of "past military" spending, and includes 80% of the debt interest payments under the rationale that most debt would have been avoidable with reduced military spending.[7] "Of the 100 largest economies on Earth now, 51 are corporations." She cites Anderson & Cavanagh (2000),[8] which bases this claim on the 1999 figures of GDP and corporate sales as reported by Fortune[9] and the World Development Report 2000. "We [The U.S.] have 5% of the world's population but we're consuming 30% of the world's resources and creating 30% of the world's waste." She cites Seitz (2001), who says, "...in 1990 the United States, with about 5 percent of the world's population, was using about one-quarter of the energy being used by all nations."[10] and a chapter in Global Environmental Issues that puts the US production of waste at around 10 billion tons per year before the turn of the millennium.[11] "80% of the planet's original forests are gone." She cites the Natural Resources Defense Council website, which says that only about 20% of the world's original wilderness forests remain.[12] and the website for the Rainforest Action Network.[13] "Forty percent of waterways in the US have become undrinkable." She cites a source which she quotes in a footnote as actually having said, "Today, 40 percent of our nation’s rivers are unfishable, unswimmable, or undrinkable". "In the Amazon alone, we’re losing 2000 trees a minute." She cites de Seve (2002), which puts the Amazon deforestation rate in 1995 at 5 million acres (20,000 km2) a year. "Each of us in the U.S. is targeted with more than 3,000 advertisements a day." This particular figure comes from the American Academy of Pediatrics[14] which itself cites a 1999 Albuquerque Journal article by columnist Ellen Goodman[15] on a figure of 3,000 ads viewed by young Americans on television, the internet, billboards, and magazines.[16] Despite the specific wording of this article ("The average young person views more than 3000 ads per day..."), Annie Leonard specifies that she is referring to ads targeted, not necessarily viewed. "Each of us in the United States makes 4​1⁄2 pounds (2.04 kg) of garbage a day." She cites the U.S. Environmental Protection Agency website, which states that 245.7 million tons of municipal solid waste was produced in 2005.[17] Taylor & Morrissey (2004:247) reiterates this figure. "Dioxin is the most toxic man made substance known to science. And incinerators are the number one source of dioxin." She cites Mocarelli et al.[18] Leonard also quotes what Victor Lebow said in 1955 regarding economic growth:

"Our enormously productive economy... demands that we make consumption our way of life, that we convert the buying and use of goods into rituals, that we seek our spiritual satisfaction, our ego satisfaction, in consumption... we need things consumed, burned up, replaced and discarded at an ever-accelerating rate."[19]

the wikipedia article about the video